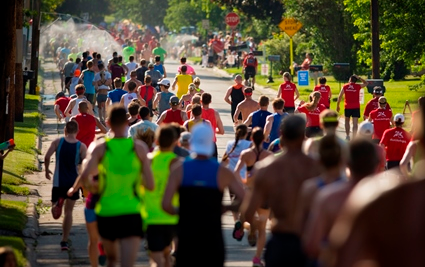 The Bellin Run, a 10K held annually in Green Bay, Wisconsin on the second Saturday in June, is one of the region’s premier sporting events and has grown to be one of the largest 10K races in the nation. The event was first held on June 12th, 1977, and was known as the Bellin Heartwarming Run, to promote cardiovascular fitness.

Intended to be a one-time event to celebrate an addition to Bellin Hospital, the run drew 881 participants and featured running great Frank Shorter. Early the next year, Bellin began receiving calls about the date for the next Bellin Run, so another was held – and a tradition was born!

In its 45 years, the Bellin Run has grown to inspire a growing number of individuals to engage in healthy habits. In 2019, the event drew exactly 11,070 walkers, runners, and wheelchair participants.

While the 2020 and 2021 events were held virtually, with over 5,000 participating in 2021, this year’s run returns to its traditional in-person format, and will take place this Saturday, June 11th.