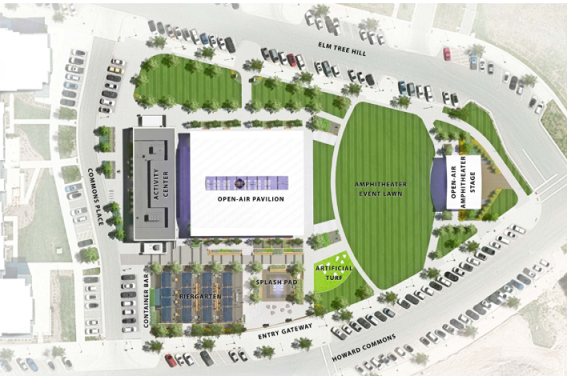 The public space at Howard Commons consistently has been shown as the focal point for the Village Center project. Now the goal to develop a gathering place for our community is coming to fruition this summer when crews will break ground in June on the Arnold and Gloria Schmidt Pavilion and several complementary amenities.

Planned east of the Howard Commons apartment complex, the project includes an activity center on the west side of the site adjacent to a pavilion in the center, where a splash pad and beer garden also will be located, and an amphitheater with a lawn area and stage off to the east.

The pavilion will serve as a skating rink in the winter. Unlike the Pinewood ice rink, it will have an artificial cooling system that will allow it to stay open at least from November through February. Skate rentals also will be offered. The rest of the year, the pavilion and adjoining areas will host events such as the Howard Farmers Market, the Rock the Commons concert series, food festivals, movies, live music acts, and other gatherings.

The development is modeled after the William E. Urschel Pavilion and Central Park Plaza in Valparaiso, Indiana. The project is being funded through naming rights and TIF #8 revenues. Dan Schmidt, who owns Bay Industries in Green Bay, purchased the pavilion naming rights for $4.875 million to honor his parents who founded the company.

To assist with debt service, the village extended the life of TIF #8 for three additional years. Both the beer garden and ice rink are expected to bring in significant revenues to offset costs. To provide an additional funding cushion, naming rights are being solicited for the activity building and stage, as well as smaller amenities.

Additional roads, roadway and trail extensions, parking stalls, and utilities also are part of the development. That work already has started. The village hopes the project will be completed by spring or summer of 2023.