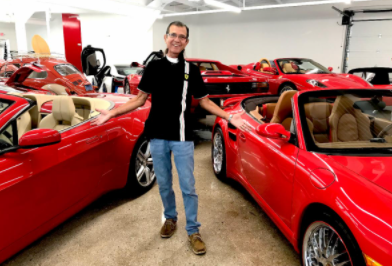 At some point between four hooves and four-on-the-floor, the automobile ceased being an implement and became a centerpiece of our existence.

Suddenly, we could go most anywhere in the world four wheels would allow, and get there in style.

Where the automobile has taken Dale Besson in his life, however, is far beyond where any road has ever taken the rest of us.

As I sat down to write The Steering Column this month, I had every intention of writing about Dale’s incredible collection of exotics now on display at The Automobile Gallery. Instead, I found myself writing about nothing. That’s right; NOTHING. By the age of two, Dale Besson and his four brothers were without a father, without indoor plumbing, without milk for their cereal, and, many days, even without the cereal itself. They had nothing.

Their mother worked long hours to feed five hungry boys on waitress wages, but there was never enough. Worse, there never would be enough. Dale’s life was completely empty, yet his soul was completely full. His soul gave him strength, drive, and determination.

Though life was hopeless, Dale refused to be helpless. Other kids played, while he worked tending yards for neighbors, baling hay, bussing tables, and pumping gas just to survive. He was already poor, and classmates only made it worse by voting him Most Likely Not to Succeed.

Dale didn’t hate them, what he hated was being poor and was determined to change his life the only way he knew how, by working even harder.

By 21, Dale owned his first business. Before his 40th birthday he and a partner bought a commercial HVAC business and built it into a major success. Other ventures followed, and just when life seemed to be handing Dale everything he deserved, he was handed a death sentence instead — throat cancer. Cancer didn’t know who it was up against.

If there was one thing Dale Besson knew how to do, it was survive. That was more than a decade ag,o and Dale not only survived, he thrived — and created one of the finest collections of exotic automobiles in the U.S.

Circumstances either make us bitter or make us better. If there is a better man than Dale Besson, I haven’t met him. Yes, his car collection is worth millions, but to me, it’s Dale’s character that makes him perhaps the wealthiest man I have ever known.

He truly is The Super Man with the Super Cars!

If Dale’s incredible story has touched you on some level please come visit his incredible collection before it leaves our Gallery in November.