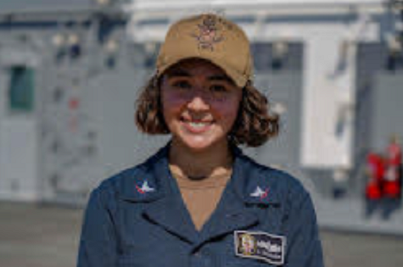 “I joined the Navy because I was not sure what I wanted to do in college, so I joined to get the experience and travel the world,” said Weidner.

Today, Weidner serves as an electronic technician aboard the USS Boxer, a warship which is homeported in San Diego.

An electronic technician is responsible for working on the ship-to-ship and the general communications systems.

Weidner relies upon skills and values from lessons learned in Green Bay to succeed in the military.

“My parents taught me to do more than what is expected of me,”  Weidner said. “It has helped me to grow, take on more responsibility and to take on greater roles with my job.”

The USS Boxer, a Wasp-class amphibious assault ship, commissioned Feb. 11, 1995, is the sixth U.S. ship to bear the name. The ship recently completed a scheduled maintenance availability and is preparing for upcoming operations.

Boxer’s crew is made up of approximately 1,200 officers and enlisted personnel and can accommodate up to 1,800 Marines. Amphibious assault ships transfer Marines, equipment and supplies and can support helicopters or other aircraft, according to Navy officials. They also are capable of accessing 75 percent of the world’s beaches.

Serving in the Navy means Weidner is part of a world that is taking on new importance in America’s focus on strengthening alliances, modernizing capabilities, increasing capacities and maintaining military readiness in support of the National Defense Strategy.

“The Navy is forward deployed and provides a constant reminder of our strength and dedication to freedom,” said Weidner.

Navy officials continue to emphasize that the prosperity and security of the United States is directly linked to ready sailors and a strong Navy.

“Maintaining the world’s best Navy is an investment in the security and prosperity of the United States, as well as the stability of our world,” said Adm. Mike Gilday, Chief of Naval Operations. “The U.S. Navy – forward deployed and integrated with all elements of national power – deters conflict, strengthens our alliances and partnerships and guarantees free and open access to the world’s oceans. As the United States responds to the security environment through integrated deterrence, our Navy must continue to deploy forward and campaign with a ready, capable, combat-credible fleet.”

Sailors like Weidner have many opportunities to achieve accomplishments during their military service.

“My proudest achievement is earning both my surface warfare and my aviation warfare pins during my first year on the ship,” said Weidner. “Serving means being part of a team with a common goal. We come from different backgrounds and put that aside to work together to achieve the mission.”

As Weidner and other sailors continue to train and perform missions, they take pride in serving their country in the United States Navy.