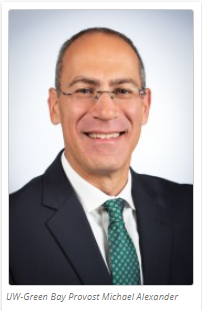 Green Bay, Wis.— Dr. Michael Alexander, provost and vice chancellor of academic affairs at the University of Wisconsin-Green Bay, has been named the University’s seventh chancellor. Alexander’s appointment was confirmed Thursday, April 2nd, 2020, by the UW System Board of Regents, following the recommendation of a selection committee. He will begin his new role May 1st, 2020.

“I am honored and humbled to work for the dedicated and talented students, faculty and staff at the University of Wisconsin-Green Bay,” Alexander said. “While my position as chancellor may be new at the University, my passion and dedication for the people of this community are stronger than ever and my family is proud to call Green Bay our home. With a growing academic portfolio, deep connections to the community and presence in the region, UW-Green Bay will continue to expand its impact on the population it serves.”

Alexander has served as provost and vice chancellor at UW-Green Bay since July 2019. As the University’s second highest administrative officer and senior academic officer, he oversees programming and leadership of the four academic colleges; the Weidner Center for the Performing Arts, the Division of Continuing Education and Community Engagement, the UW-Green Bay Libraries, the Office of Admissions, and leads the four UW-Green Bay campuses including those in Marinette, Manitowoc and Sheboygan. As provost, he consults with the chancellor on all aspects of the University and speaks for the University in the chancellor’s absence.

Prior to his role at UW-Green Bay, Alexander served as director of the School of Music at the University of Northern Colorado. He has also served as the interim director of the School of Music at Kennesaw State University in Georgia. Alexander holds a Doctor of Musical Arts from UW-Madison. He earned his master’s degree in Instrumental Conducting from UW-Milwaukee, and a Bachelor of Music Education from the University of Georgia. The Grand Island, New York native lived in Wisconsin from 1995 to 2004.

“I know the work of the University will increasingly be a driver in the educational, economic, cultural and civic life of Green Bay, Manitowoc, Marinette and Sheboygan. Our mission and vision is for a university that fearlessly meets challenges, solves problems, embraces diversity, cares about our region and provides access to education for all who want it honors the innovative spirit of the founders of the University and moves us forward. The potential for the future of this institution is immense. My belief in that future has been reaffirmed daily from the moment I arrived in Green Bay and first set foot on the campus.”

Alexander will be the UW-Green Bay’s seventh chancellor, succeeding Gary L. Miller, who left the University in September 2019 to serve as president at the University of Akron. Miller served as the university’s top administrator since August 2014.