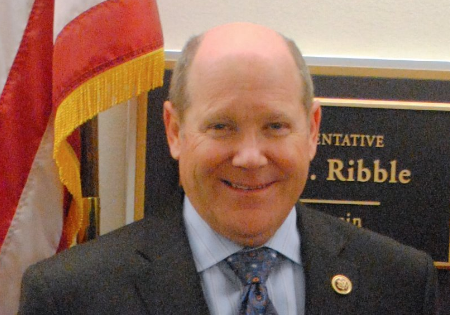 A strong advocate for the community and the university, former Congressman Reid Ribble will bring his political insight and expertise to UW-Green Bay beginning this spring.

As the inaugural practioner in residence in political science at UW-Green Bay, Ribble will provide both students and the community opportunities to have important discussions about critical topics in American democracy. During each academic year, Ribble will spend time on campus engaging in guest lectures, panel discussions, and other initiatives.

“I am excited to be a part of the political science program at UW-Green Bay,” said Ribble. “The ability to share what I have learned from my personal experience while serving in the U.S. House of Representatives can become a launch pad for careers in government for UW-Green Bay students.”

Ribble is no stranger to the classroom. As a yearly guest speaker in Professor Aaron Weinschenk’s political science classes, he’s not only been able to share his knowledge but has also helped students become more involved in public affairs.

“We could not be more excited to welcome Congressmen Ribble to the university,” said Weinschenk, who has collaborated with Ribble on a variety of initiatives since 2015. “His insight into the inner workings of the political landscape will help provide our students with important ideas on what it takes to be a leader in our government. In addition, his connection to northeast Wisconsin, entrepreneurial spirit, and outstanding work ethic will show students how much they can achieve.” Weinschenk added that he has observed Ribble deliver many guest lectures in his classes over the years and is “always impressed by how Ribble connects with our students and creates a sense of excitement about government and politics.”

Over the years, he has helped UW-Green Bay students secure inteships in congressional offices. Ribble also serves on the UW-Green Bay Chancellor’s Council of Trustees.

“We are excited to have Congressmen Ribble affiliated with the university in this way,” said UW-Green Bay Chancellor Michael Alexander. “He brings a wealth of political experience, is a natural teacher, and embodies the ideal that we should never stop learning. We are grateful for his time and knowledge of how public service can have an incredible impact in our community.”

Reid Ribble served six years in the U.S. House of Representatives (R-WI-08). During his tenure, he served on the Agriculture, Transportation and Infrastructure, Budget and Finance, and Foreign Affairs Committees, where he served as vice chairman of the Committee on Emerging Threats. During his time in Congress, Ribble met with more than 25 heads of state and in his capacity on the Committee on Foreign Affairs traveled extensively throughout Eastern Europe and the Middle East. For more than 30 years, Ribble was the president of his own roofing company in Kaukauna, Wisconsin.