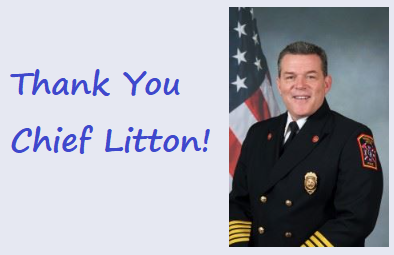 (Green Bay, WI) – After 9 years of dedicated service to the citizens of Green Bay, Allouez, and Bellevue, Green Bay Metro Fire Chief David Litton has announced his intention to retire by the end of the year.  This marks the end of a nearly 40-year career in the Fire Services.

“Chief Litton has made a tremendous impact on our community,” stated Green Bay Mayor Eric Genrich. “Thanks to his leadership, Green Bay was the first city in Wisconsin to achieve a Class 1 Public Protection Rating from the Insurance Services Office. We also saw the successful merger of the Green Bay, Allouez, and Bellevue Fire Departments, benefiting all citizens with exceptional Fire and EMS services. Finally, he has always led the department with an absolute commitment to protecting the well-being of our firefighters and the safety of our community. I will miss his leadership, and I thank him for his service to our City.”

Litton began his fire service career in 1982 with the Crete Township Fire Protection District where he volunteered for 1 year. He joined the University Park Fire Department (Illinois) in 1983 as a volunteer, and began his full-time employment there as a firefighter/paramedic in 1985. David rose through the ranks and was appointed Fire Chief in June of 1995. In 2005, Litton took on the additional role of Village Manager for University Park. In 2008, Litton accepted the position of Fire Chief for the City of Bolingbrook, Illinois, where he served until May of 2013. In July of 2013 he joined the Green Bay Metro Fire Department as Fire Chief.

With Chief Litton’s announcement, the Green Bay Police and Fire Commission will begin the process of selecting a new Chief.

“Chief Litton will be leaving some big shoes to fill.  Having this extensive lead time is very helpful to the Commission in our advertising and selection process,” noted PFC President Rod Goldhahn. “Our goal will be to have a new Chief selected and in place prior to Chief Litton’s retirement, to allow for a smooth transition.”

The selection process will begin immediately with the City of Green Bay Human Resources Department.