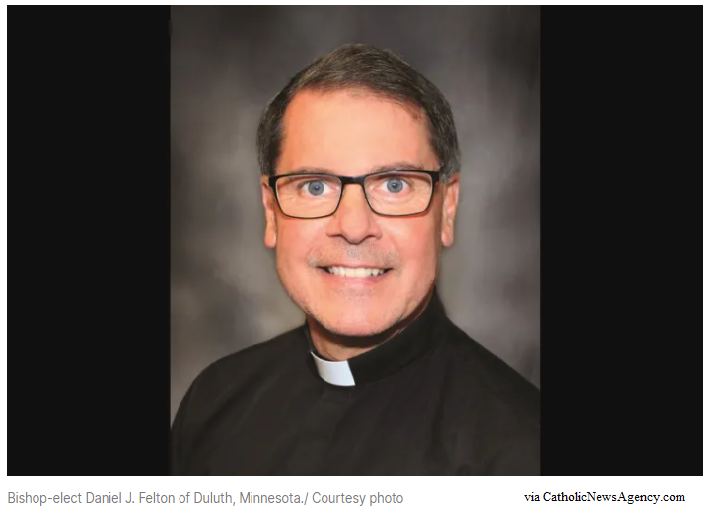 From the Chancery Office of the Catholic Diocese of Green Bay:

GREEN BAY, Wis. (April 7, 2021) – The Holy Father, Pope Francis, today announced the appointment of the Very Reverend Daniel Felton as the tenth Bishop of the Diocese of Duluth, Minnesota.

Bishop Elect Felton will be consecrated a bishop and installed in the Diocese of Duluth during a Mass on Thursday, May 20th, 2021.

Presently, Father Felton is the Vicar General and Moderator of the Curia for the Diocese of Green Bay, a position he has held since July, 2014.

“I could not be more delighted that The Holy Father has chosen to elevate Father Dan Felton to the Episcopacy as the tenth Bishop of the Diocese of Duluth”, said Green Bay Bishop Bishop David L. Ricken.

“Bishop-elect Felton, a native of the Diocese of Green Bay, has excelled in his service to this Diocese in the many positions he has held, and has been a trusted advisor in his role as Vicar General and Moderator of the Curia. His presence, ministry, and expertise will be sorely missed here, but he will bring many gifts to the faithful of the Diocese of Duluth.”

Bishop-elect Felton was ordained a priest on June 13, 1981 by Bishop Wycislo. His parish assignments have included Holy Innocents in Manitowoc, St. Raphael the Archangel in Oshkosh, St. Francis of Assisi Parish in Manitowoc, St. Edward in Mackville, St. Nicholas in Freedom and St. Mary in Greenville.

Fr. Felton was also the Director of Affiliate Affairs for the Catholic Telecommunications Network of America.

Father Felton is a member of the Diocesan College of Consultors, Presbyteral Council, Leadership Roundtable, Priest Personnel Board, Diocesan Finance Council, and St. Norbert College Board of Trustees. He also served as a member of the National Advisory Council of the United States Conference of Catholic Bishops.