If not, You Should!

Pickleball is America’s fastest growing sport. It started back in 1975 in Bainbridge, Washington where two fathers were trying to get their kids off the couch, and a dog named “Pickles” chased the ball. It is said to be a cross between tennis, ping pong, and badminton.

A paddle is used to hit a “wiffle like” ball over a net on a court about badminton size. The growth of pickleball took off and today there are tournaments across the country and internationally and many thousands of recreational players.

The growth of Pickleball in Green Bay matches the growth in the U.S.

Pickleball Players started with a handful of players and now numbers about 370 people. Pickleball play now takes place outdoors at 3 sites plus one soon to open and others being talked about, and numerous indoor courts in the winter.  It is estimated that 40-70 people play each day in Green Bay. Pickleball can be played by folks of all ages and of various skill levels from the more social type of play to competitive tournaments, some of which are hosted in Green Bay.

Having regularly scheduled playing times encourages players to get together at the courts at specific times. This allows a large number of people to play rather than going to a park and hoping to get enough folks to play a game. However, it also allows and encourages folks to get their own group together at other times at any of the locations.

A published schedule brings folks in who are traveling in the area and there have been people from all over visiting the Green Bay area and then playing some pickleball with the Packerland Pickleball Players-a very welcoming group!

Packerland Pickleball Players have been offering Pickleball 101 for a number of years and will continue to do so to introduce adults to the game. But people are not just left at the beginner level-numerous drill sessions and “take your game to the next level” are also offered.

For information as to play schedule, Pickleball 101, drill sessions, tournaments, playing tips, and all things going on with Packerland Pickleball Players, check out the website: www.packerlandpickleballplayers.com, and check out Pickleball on YouTube to learn more! 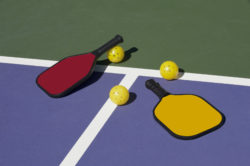 Additional locations to play in the Greater Green Bay Area include Legion Park in De Pere, Langlade Park in Allouez and a new location at Four Seasons Tennis Club in Allouez.  For the Four Seasons schedule, people can give them a call at 920- 337-6565.