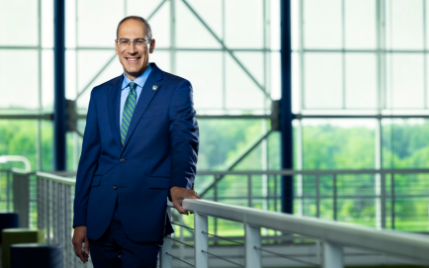 Green Bay, Wis.—Campus and community will join together to celebrate academic tradition and welcome a new era in school history with the formal investiture of the University’s seventh chancellor, Michael Alexander. Although Alexander was named the University’s chancellor in spring of 2020, the University postponed installation ceremonies until this fall because of the pandemic.

The Chancellor’s Installation Ceremony will be held at 11am, Thursday, September 30th, 2021, in Cofrin Family Hall of the Weidner Center for the Performing Arts on the Green Bay Campus. There will also be a virtual opportunity to watch the occasion.

Since being named Chancellor on May 1, 2020, Michael Alexander has focused on building tangible, action-based priorities to advance the University’s mission and values.

Formerly the University’s provost and vice chancellor, Alexander has worked towards strengthening UW-Green Bay’s connections to and with regional high-school students, increasing non-credit offerings for the employees of Green Bay area businesses, and continuing to raise the trajectory of the University’s impact and outreach.

The list of ceremony participants includes UW System President Tommy Thompson, who will issue the leadership charge and present to Alexander his symbol of office (the UW-Green Bay Chancellor’s Medallion); members of the UW Board of Regents; and Dr. Tina Sauerhammer, vice chair of the Chancellor’s Council of Trustees. Aisa Micaiah Rogers, a senior studying Musical Theatre and Dance, will perform the National Anthem, Lift Every Voice and Sing, and the Alma Mater. Secretary of Faculty and Academic Staff Steve Meyer will serve as the master of ceremonies. Alexander will also provide comments on the future of UW-Green Bay.