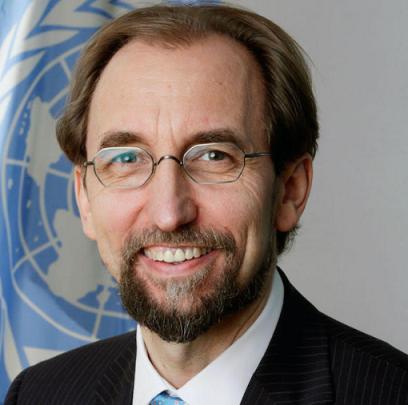 Prince Zeid Ra’ad al Hussein will present the Fall 2022 Norman and Louis Miller Lecture in Public Understanding on October 25th, at 7pm, in the Abbot Pennings Hall of Fine Arts -Walter Theatre, located at 315 Third Street in De Pere. The lecture,  is free and open to the public.

Ra’ad al Hussein’s lecture will discuss concerns about the threats to global stability posed by such forces as racism, xenophobia, nationalism and authoritarian leaders, and poses that the safety of humanity will be secured only through vision, energy and generosity of spirit.

Ra’ad Al Hussein of Jordan was the sixth High Commissioner for Human Rights (2014-18) and the first Arab and Muslim to hold the position. Ra’ad Al Hussein draws from his career in diplomacy to address the geopolitical climate, relations in the middle east, and the current challenges to human rights.

At the U.N., Ra’ad Al Hussein called upon powerful and small states alike to secure human rights in their own countries. Ra’ad Al Hussein now serves as the president and CEO of the International Peace Institute (IPI).

The Norman and Louis Miller Lecture in Public Understanding was established in 1993 by the Norman Miller Family Foundation to honor Norman’s brother, Louis Miller, who died in 1989. When Norman died in 2008, his name was added to the lecture series, which promotes unity, communication, and tolerance among different cultures, religions, ethnicities, and traditions.

For more information, call the Norman Miller Center at 920-403-3881, or visit their website HERE.