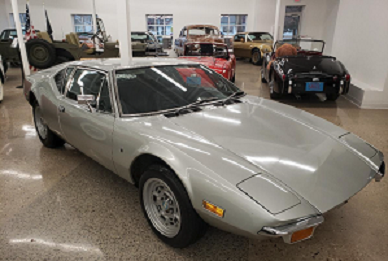 Time flies. And so did the Pantera. It was so fast that it arrived years ahead of its time.

The trouble was, the Pantera was the “perfect car” with far from perfect timing. This cool cat missed the memo on the dress code for the entire 70s’ decade and showed up in the middle of bell bottoms, love beads and big hair wearing a sleek Italian suit and looking like Neil Armstrong belonged behind the wheel.

Road Test Magazine was so impressed it crowned the Pantera its Import Car of the Year over Ferrari, Lamborghini, Maserati, and Porsche.

This Super Car seemingly had it all….except a crystal ball. The gas crisis of the early 70s loomed, and horsepower took a hit at the hands of the U.S. government.

By 1973, the exquisite 330 hp Ford 351 Cleveland V-8 powering the Pantera had 65 horsepower choked out of it. The death blow came when Ford, which marketed the Pantera through its Lincoln-Mercury dealers, pulled out after 1975.

Pantera is Italian for Panther and, like its namesake, the De Tomaso Pantera faced extinction. It survived for 21 years (1971-1992), but most of its life was spent in the wilderness.

Of the total 7,062 Panteras produced, all but 1,562 were sold in the first four years when Ford was at the helm.

One of the few originals left on the planet can be seen right now at The Automobile Gallery & Event Center. Peter Becker is the original owner of this all-original Silver Metallic 1972 Pantera, the final year of the “purest” Panteras.

Mr. Becker’s Pantera has traveled less than 45,000 miles in the 50 years since he picked it up at Manhattan Ford-Lincoln-Mercury in October 1972 in the heart of New York City. All it takes is one glance at his license plate to see that Peter Becker has a “License to Thrill!”