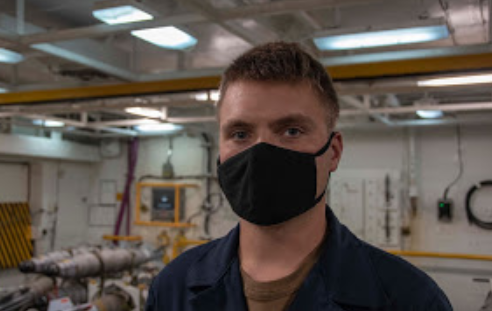 Airman Reetz is an aviation ordnanceman, conducts the assembly and disassembly of ordnance, and maintain magazine upkeep.

“I’m proud to be protecting my country,” said Reetz. “I know we are making a difference and I can’t wait to see my family and friends again.”

Since the ship’s Yokosuka departure in June 2020, the Ronald Reagan continues to operate in the Indo-Pacific alongside allies and partners to demonstrate the United States of America’s commitment to defense agreements, as well as provide security and stability in support of a free and open Indo-Pacific region.

The Ronald Reagan Carrier Strike Group is the Navy’s only forward-deployed strike group and one of America’s most visible symbols of resolve.

The Green Bay News Network salutes Airman Logan Reetz and all of the brave men and women serving our country in the United States Military.

Visit the USS Ronald Reagan (CVN 76) photo gallery for more photos and information regarding past and current operations here: https://www.dvidshub.net/unit/CVN76