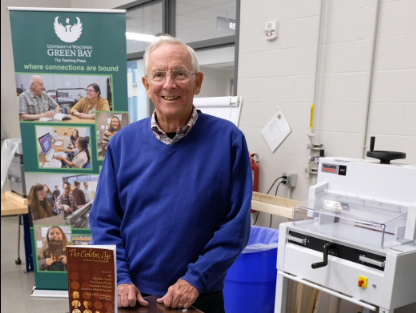 The latest book (published by UW-Green Bay’s The Teaching Press), by author Phil Hauck, chair of The Executive Committee, now VISTAGE III, XXXII, The Golden Age of Brown County Enterprise, highlights the incredible success of businesses whose names are part of the bedrock of the community. These businesses were on the cutting edge in their respective fields.

“Creative solutions”, “Innovative ideas”, “Cutting-edge technology”, these phrases are typically associated with east and west coast entrepreneurs. But in the late 80s and 90s, this was Midwest business-as-usual, right here in Green Bay, Wisconsin.

“…they were learning and talking about and doing things that others around the country would not do for another two years,” says Hauck. “It was truly a ‘golden age’ for greater Green Bay corporations.”

Tiny Krueger International (KI) developed high-end design business furniture to capture the eye of giant Microsoft, and even today serves Google and Facebook. American Medical Security (AMS), the second small business health insurer started by “Ron and Wally,” pioneered both medical cards and co-pays in their segment of the industry.  Schneider took on the mammoth Teamsters Union to insure its survival during deregulation. Fort Howard persevered as the lowest-cost tissue producer in the world, and pioneered use of recycled paper FIFTY years before it became popular.  Schreiber Foods became the “go-to” processed cheese provider for, first, McDonalds, and subsequently almost every other major fast-food chain, and today is also the second-largest yogurt producer in the world.