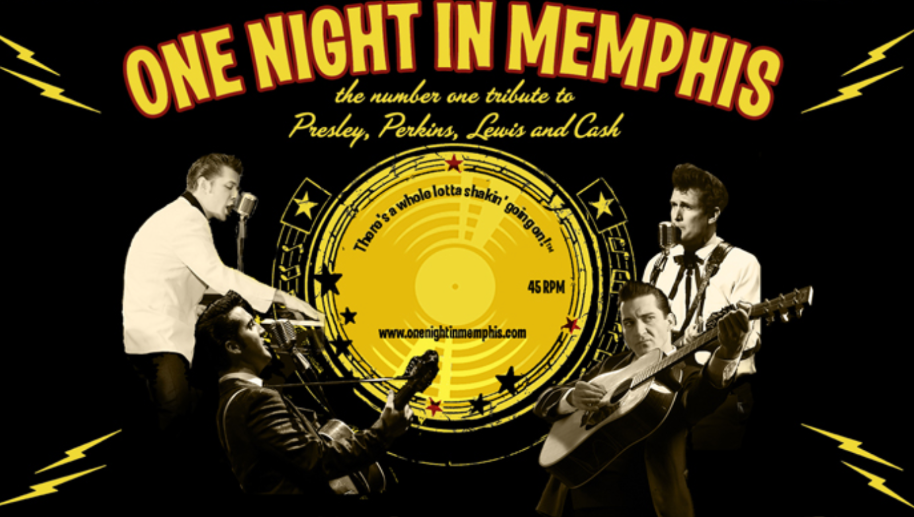 For one night only, Saturday – November 2nd, a Green Bay-area audience will be transported back to December 4th, 1956, when music history was being made in Memphis, Tennessee.

One Night in Memphis—a rocking concert tribute to Carl Perkins, Jerry Lee Lewis, Elvis Presley and Johnny Cash—comes to the Ashwaubenon Performing Arts Center Saturday, November 2nd at 7:30 p.m. as part of the theatre’s National Series. The show recaptures the spirit of the night when an extraordinary twist of fate brought four of the biggest names in rock ‘n’ roll to the same recording studio at the same time.

One Night in Memphis creator John Mueller explains that Carl Perkins had gone to Sun Studios to record new material, and a young performer by the name of Jerry Lee Lewis was booked to play piano on his session. Elvis, the biggest name in show business at the time, dropped by early that afternoon to pay a visit. Impressed by what he heard of Perkins’ session, Presley joined him in the studio, and a historic jam session was underway. Johnny Cash, whose hits were appearing on the country charts, would then arrive to complete the fantastic foursome.

This chance collaboration was recorded by a sound engineer who—unbeknownst to the musicians—kept the tape rolling. The recording captured all four artists in their prime and would later be dubbed the “Million Dollar Quartet” by a Memphis newspaper reporter.

Tickets for One Night in Memphis start at $29, with subscriber and group discounts available. To purchase or learn more about this or other upcoming events, visit ashwaubenonpac.org or call (920) 494-3401.

Electricity in the Air at The Automobile Gallery in Green Bay