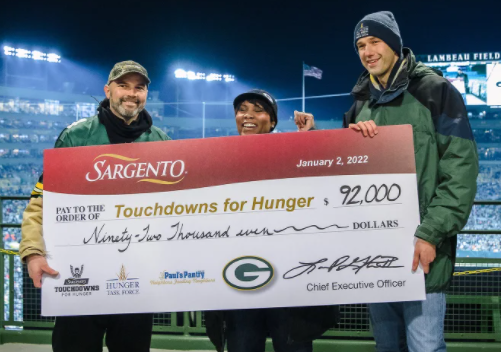 Following another successful season of Touchdowns for Hunger resulting in a donation of $108,000, the Green Bay Packers and Sargento Foods Inc. will continue donating $2,000 per Packers touchdown during the NFL playoffs.

As the Official Cheese of the Green Bay Packers, Sargento donates $2,000 toward hunger relief in Wisconsin for every touchdown the Packers score during the regular season.

The Packers ended the regular season with 54 touchdowns.

These funds are shared by Paul’s Pantry in Green Bay and Hunger Task Force in Milwaukee who are on the front lines of hunger relief.

Since it began in 2002, Touchdowns for Hunger has raised more than $1.6 million to help alleviate hunger in Wisconsin and has provided more than one million meals for those in need.