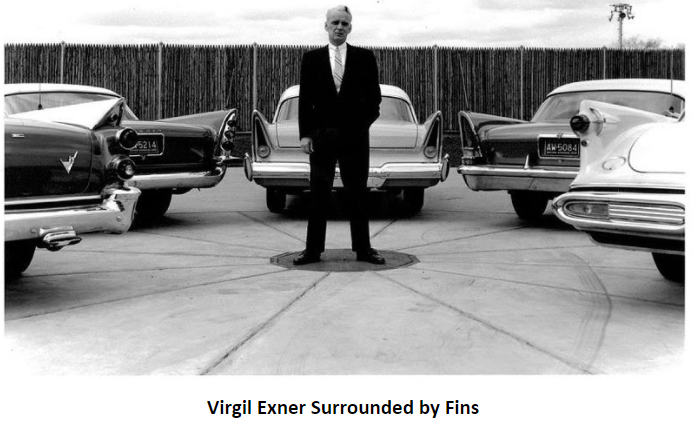 November 11th, 1620, the Pilgrims landed at Plymouth Rock. 335 years later, Plymouth the car company landed on a brilliant idea; turning over the redesign of its entire lineup to the incomparable Virgil Exner. In 1955, Plymouth’s parent company, Chrysler Corporation, hired Exner who was the brains and brilliance behind Studebaker’s seminal and sleek designs.

Simply stated, Virgil Exner is singularly responsible for the “Fin-tastic designs of the “Fabulous 50s”.

Right here is where I will pause in anticipation of the protests that are about to fly my way via Chevy lovers everywhere. What about the legendary ’57 Chevy you ask? It pains me to say this as a guy who grew up in a family completely devoted to Chevrolets, but the truth is that inquisitive eyeballs from GM somehow managed to catch a glimpse of Exner’s designs before they even made it to market. Whether that was sleuthing or stealing, I will leave to you to decide.

Either way the net effect was the same. GM immediately shifted course and began designing its own family of fins. Rubbing salt into the proverbial wound, GM not Chrysler holds the world record for the tallest fins ever produced, the 45-inch spears piercing the atmosphere on a 1959 Eldorado Biarritz.

From Desotos to Dodges, Chrysler Corporation’s reputation for producing big, boxy, unimaginative automobiles was jettisoned in favor of Exner’s new “Forward Look” that would dominate automotive design from 1955 to 1963.

Exner’s unmistakable imagery instantly transports us back to a time in this country when “Excess meant Success” and people weren’t just living in the future, they were forging it.

One of my favorite models from that era is the stunning 1960 Plymouth Fury Convertible which we are lucky enough to have in our collection at The Automobile Gallery. Of the 65,000 Furys sold that year only 7,080 were convertibles and just a handful of those were painted Chrome Green.

Toss in an interior that looks like George Jetson designed it and I fell head over heels in love the first time I saw it. 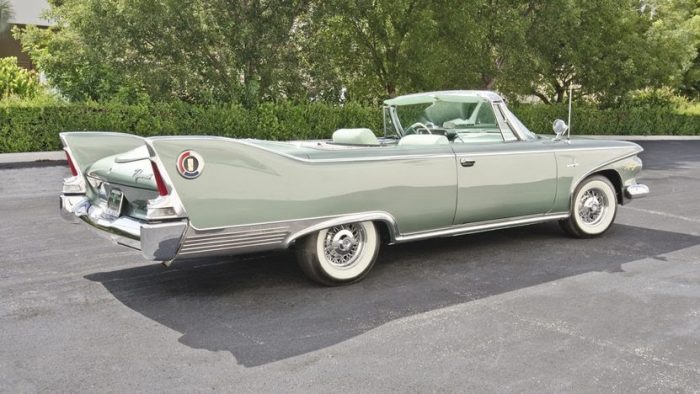 Virgil Exner retired from Chrysler in 1961 and soon after the fins followed as Chrysler went a different direction in Exner’s absence.

There is more to this story though: One of the most famous race cars in history, the Porsche 917, won back-to-back championships at the 24 Hours of Le Mans in 1970 and ’71 wearing aerodynamic fins inspired by none other than Virgil Exner. Could there be a more fitting FIN-ale to this story than seeing Virgil Exner crowned the winner?