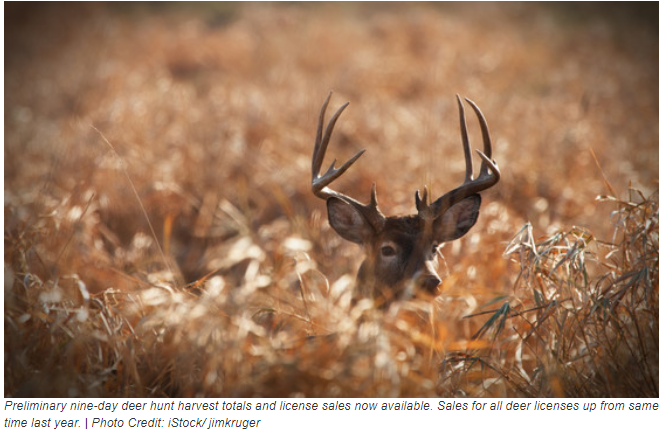 Preliminary figures indicate that the number of deer hunters in Wisconsin increased compared to the same period for both 2019 and 2018.

As of midnight Monday, Nov. 23, sales for gun, bow, crossbow, sports and patron licenses reached 810,233. Of that total, 559,591 were for gun privileges only, including gun, patron and sports licenses. The year-to-date sales for all deer licenses are up 3.2% from the same time last year.

Female hunters are the largest growing demographic in 2020, with the number of female hunters reaching nearly 90,000, up 9% from last year.

The number of non-resident licenses decreased this year, likely due to COVID-19.

Of the total licenses sold, 58% were sold online, and 42% were sold by DNR license agents, which includes private businesses across the state.

Final license sales figures will be available in January, at which time DNR staff will perform a thorough analysis and interpretation.

Hunters are reminded that the firearm seasons have only just begun.

There continues to be great hunting throughout the rest of the season with Thursday and Friday generally showing an increase in harvest. In addition, the muzzleloader season runs from November 30th – December 9th, and a statewide antlerless-only season occurring from December 10th – 13th.

Select units around the state also have the antlerless-only Holiday Hunt with runs from December 24th – January 1st. However, hunters should check the regulations for a list of specific units.

A detailed summary of preliminary registration totals is available here.

Leading up to the nine-day season, harvest numbers for the archery and crossbow seasons show hunters are choosing to get out during that season and harvest deer as buck harvest was up 17% and antlerless harvest is up 17.5% statewide.