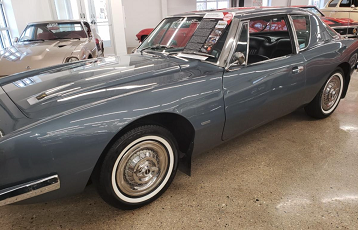 I can’t imagine anyone being happier this new year than Tesla, after announcing earlier this month that it sold a record shattering 936,172 electric vehicles in 2021, up 87% over 2020.

I share that tidbit on Tesla in the context of introducing you to a car that was “ELECTRIC” — in every sense of the word — a full 6 decades removed without a power cord in sight: The 1963 Studebaker Avanti!

As one of the last great independent car companies in the U.S., Studebaker is tragically overlooked and overshadowed when “overachiever” is the word that best reflects this innovative company.

Let this sink in for a quick second. Studebaker was in business 11 years before Henry Ford was born and built everything on wheels for the next 114 years. Five Studebaker brothers built wagons and carriages before roads existed, produced one of the first electric cars in 1904, and survived to tackle transportation on interstate highways in the 50s and 60s.

Forever lacking the big budgets of the Big Three, GM, Ford, and Chrysler, this spunky company from South Bend, Indiana, relied on brilliance, big ideas, and, on this occasion, a big name –Raymond Loewy, the creator of the Avanti.

You probably think you aren’t familiar with Raymond Loewy but, trust me, you are. Raymond Loewy is everywhere you look. His resume would fill up a flash drive, but here is just a tiny list of his wonderous designs:

And, in the event you aren’t easily impressed, he designed Air Force One!

Fresh off designing Air Force One in 1962, Loewy was literally flying high when Studebaker’s president, Sherwood H. Egbert, turned to him to restore Prestige, Performance, and Profits to a company struggling to compete against the monsters in Motown. Loewy responded with the Avanti!

What is truly astounding is that Loewy and his design team of Bob Andrews, John Ebstein, and Tom Kellogg completed the entire project in a staggering 40 days!

That inspired team broke all the rules and broke new ground in the process. In stark contrast to chrome covered cars of the 60s, the Avanti has minimal chrome, and a hidden grill that stands out in stunning simplicity.

The Avanti was the first American car with disc brakes, a roll bar built into the roof and a padded interior for safety. Steel was sacrificed in favor of fiberglass so that it could be rushed into production faster.

The interior resembles an airliner cockpit with an overhead console and controls (no doubt Loewy borrowed from his Air Force One adventure).

The Avanti was fast to market and even faster on the road. Paxton’s Andy Granatelli, later a legendary Indianapolis 500 team owner, gave the Avanti’s 289 V-8 a serious jolt of juice with a supercharger that spooled up the top speed to nearly 140 mph.

Rare, Rac,y and Revered, the 1963 Studebaker Avanti is a legend you can experience at The Automobile Gallery & Event Center, thanks to owners Jason and Beverly Ford. Theirs is 1 of just 42 Avanti R2s (supercharged model) dressed in Avanti Gray, and 1 of 78 specially delivered to new owners at the Stardust Hotel in Las Vegas. This Avanti began its life under the bright lights of Las Vegas 59 years ago, and we’re honored to have it shining under the bright lights once again at The Automobile Gallery!