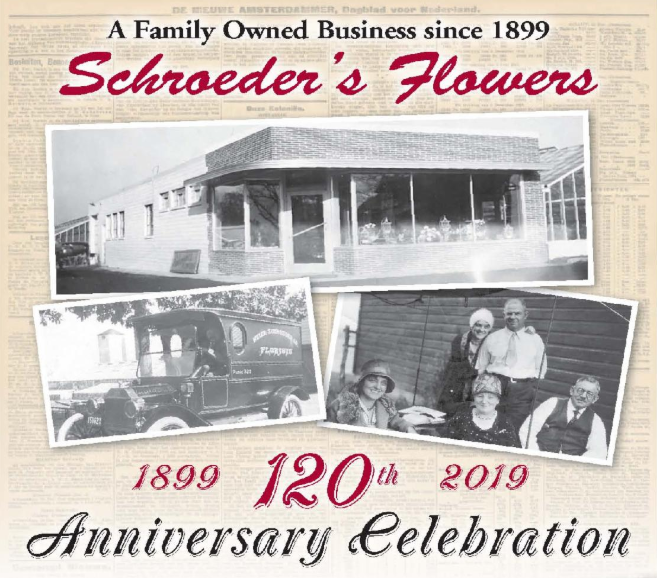 Schroeder’s Flowers is 120 Years Old! Can You Believe it?

Carl Meier, an award winning grower of chrysanthemums, came from Greisfield, Germany, with his wife Louise and 9-year-old daughter, Clara, and started Meier Floral in 1899 on the corner of Pine and Jefferson Streets in downtown Green Bay – where the YMCA is located today.

In 1903, Carl felt he needed greenhouses to grow his flowers, as it was so difficult to get fresh flowers.

He purchased land next to Woodlawn Cemetery, and built some greenhouses.

At the same time, Otto Schroeder, son of Carl’s mentor, came to Green Bay at Carl’s request to help in growing the flowers.

In 1907, Otto married Clara (Carl and Louise’s only child), and a partnership was formed – Meier And Schroeder Florist.  After the death of Carl Meier, the name was changed to Schroeder’s Flowers.

In 1949, the retail flower shop was added on Webster Avenue, next to the greenhouses, under the direction of Otto’s son – also named Otto – and his wife, Helen.  In 1971, the retail store was remodeled and expanded.

Through the years, changes have been made to the greenhouses. Schroeder’s continues to bloom under the watchful eyes of Charles and Peggy Schroeder – the 4th generation – and their son, Brian.

What’s Bloomin’ at Schroeder’s in January?