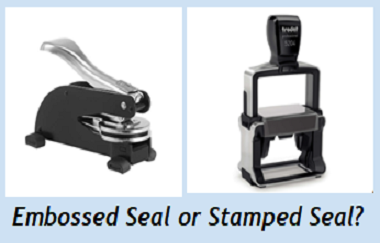 “Back in the old days”, this question would not have come up.  The earliest notaries pressed their stamps into wax seals, and a bit later on used embosser stamps directly on the document being witnessed.

In modern times, many documents must be photocopied or scanned after being notarized, or one of the people executing the document simply wants to make such a copy for themselves.  This is when the question of “which seal is best” comes into play.

For the sake of simplicity, the Notary Seal ink stamp is likely the best to use in situations where copies must be made that show the seal.

The Notary Seal embosser can also be used in these situations, but perhaps for the clearest copies, these seals are best used with carbon paper, or used over an adhesive seal placed on the document (you may have seen these on documents, they’re usually either gold or silver in color).

If a high resolution copier is used, it may copy the embossed seal clearly enough, even without the use of carbon paper or an adhesive seal.

In Wisconsin, a Notary is free to use either the embosser or an ink stamp version of their Notary Seal, as long as each version of their seal is on file with the state.  Many notaries have both types of seals.

If you have a preference for the type of seal that will be used to notarize your documents, it’s best to call ahead and be sure that the notary you choose has that type of seal available.

At Editex Business Services, both types of seals are employed, so you only need to let them know which you would like them to use.

Learn How to Become a Wisconsin Notary Public

Can a Wisconsin Notary Public Prepare Documents for You?