A very important birthday slid right past us recently, without anyone even noticing — but I did. 63 years ago, on Thursday August 6th, General Motors registered the name Corvair ahead of the introduction of its revolutionary rear engine compact car.

August 6th, 1959 was a smokey, 86-degree day in Detroit, a day like most any other late summer day at GM, except that day was a seminal moment in American automotive history, and no one realized it. That’s a shame. It’s a day that deserves to have its story told!

More than 6 decades later, the Corvair remains the first and “only” mass-produced American vehicle of any shape or kind with an air-cooled rear engine. The anticipation and excitement crested with the Corvair landing on the cover of Time Magazine in October 1959. 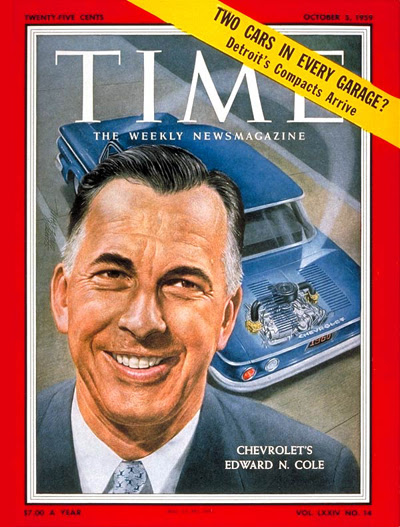 A decade later, he was bitten by the “bug” you might say and was inspired to create the masterpiece bearing his name, the Porsche 356. By 1962, Porsche had built a stellar reputation and sold 5,759 Porsche 356s that year. Chevrolet, which had trained its gaze on Porsche, sold 292,531 Corvairs the same year.

So how did such a promising and glamorous beginning disintegrate into oblivion? His name was Ralph Nader. Today, politicians court controversy as if it were as common as their morning cup of coffee but, back then, stirring political unrest was highly unusual at best and ridiculed at worst.

Barely 30 years old, Nader was a political activist who saw opportunity in the Corvair; the opportunity to destroy it while creating a platform for himself. The first chapter of his 1965 book Unsafe at Any Speed branded the Corvair “the one-car accident.”

Mr. Nader went right for the jugular pointing out a design flaw in the rear suspension that made the Corvair susceptible to flipping over when driven recklessly or at very high speeds.

Chevrolet repaired the problem, but it was too late to repair the Corvair’s reputation.

Caving into the resulting controversy, the Corvair disappeared in 1969 never to return — except at The Automobile Gallery & Event Center, where you can marvel at 1 of only 2,574 turbo-charged 1962 Monza Spyder Convertibles ever produced. This 150 horsepower Spyder was ready to catch the Porsche 356 in its web. The Corvair’s design was so advanced that it heavily influenced later European designs, in particular BMW.

It was exactly 70 years ago when the first Porsche arrived in America and you see what an incredible company it has become. Just imagine what the Corvair might have been had it been given the chance to live on. A failure? With 1,835,170 produced over 10 years? Not a chance. The Corvair may not have grown up to be America’s Porsche but it is enduring proof that it really is possible to Lead from the Rear!