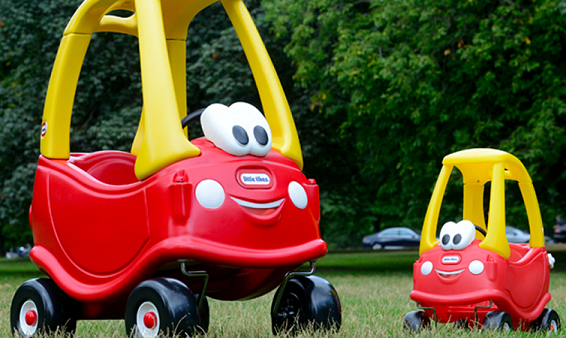 In this rapid-fire world in which we live, it’s natural to get caught up in the holiday rush and crush (which is now upon us), so this year I’m making a change. Rather than focusing on what is going under the tree, my focus is on what is under my nose; wonderful colleagues, friends, and some of the most beautiful vehicles on earth.

Like the holidays, our collection here at the Gallery unlocks lasting memories from our past. For most of us, our first car is one of those cherished memories.

And, most often we found it under the tree and not in the driveway.

What? That’s right…under the tree! Have you forgotten? I’m talking about your “very first” car?

For millions of us, it was the Little Tikes Cozy Coupe, which is fast approaching 30 million units sold since its introduction in 1979.

That’s monumental considering the Cozy Coupe only came in red with a yellow top, has never changed its style, and is totally dependent on leg power instead of horsepower.

Exercising my curiosity gene, I began an expedition into how it all began for the Cozy Coupe. Designer Jim Mariol, from Canton, OH was on a roll one day — literally. Mariol was scooting around his office in his swivel chair when the idea struck him. 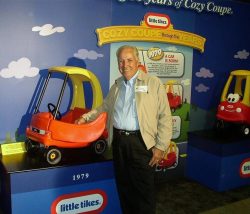 It was just that simple!

Mariol who was once a designer for Chrysler earlier in his career, began designing a car… for 18-month-olds.

His legwork produced a car that required legwork. It was ingenious!

Since its introduction 43 years ago, the Cozy Coupe has never stopped production at Little Tikes’ factory in Hudson, Ohio.

So how do you top such a big seller? With a bigger seller — at least physically. Along about 2012, Little Tikes introduced the Giant Cozy Coupe, which was built to scale while being large enough for a full-size adult.

Though he never received due credit, Jim Mariol was himself a giant in the automobile industry. Sadly, Mr. Mariol passed away in 2020 at the age of 89. He deserves to be remembered for producing the only car in history with zero emissions, unmatched mileage, and so few mechanical issues that the Cozy Coupe would rank at the top of any J.D. Powers list.