That headline is my observation.

If you think jets are fast you should see how fast time flies! Wasn’t it just spring yesterday? How did August 1st get here so fast?

This calendar flip is as jarring as any in my universe and is a reminder of just how much summer I need to pack into a precious, few days.

That wisdom also applies to automobiles. While many models and companies have deservedly disappeared from the landscape and from memory, others continue to inspire us and are timeless treasures.

One of those is Porsche, a cutting-edge company that remains ageless and peerless on multiple levels. Dr. Ferdinand Porsche went into business in 1931, but the first Porsche automobile didn’t arrive in America until exactly 70 years ago, in 1952.

Can it possibly be 70 years already?

This Porsche 356 Cabriolet was the first ever sold in the U.S. in November 1952. I wish I could tell you that it has been carefully preserved and worshiped over the past 7 decades as a priceless artifact, but that wouldn’t be telling the truth. This 356 was actually within an eyelash of becoming a novelty salad bar at a themed restaurant in Oklahoma City back in the 80s.

Luckily, the car was in such horrific condition that the restaurant gave up on the project and sold it to a scrapyard instead!

An eventual $800 purchase was the first step in a 15-year restoration to convert it into the priceless precious metal it is today. 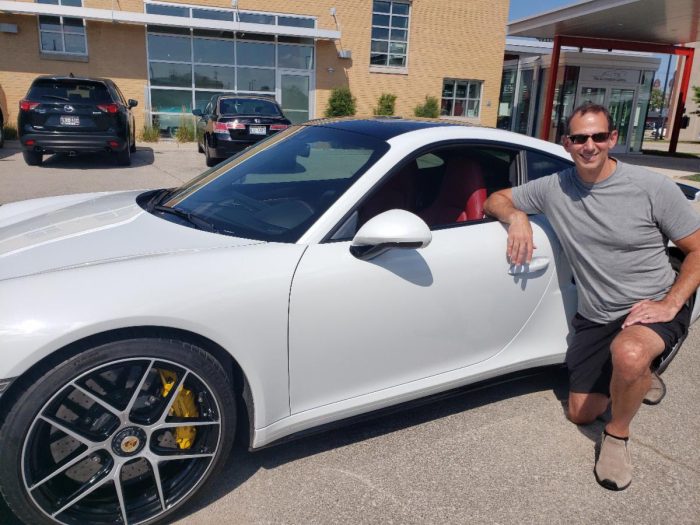 I couldn’t help thinking about that very first Porsche late last week when my good friend Mike Haddad appeared in our parking lot at The Automobile Gallery & Event Center and casually handed me the keys to his 205 mph Porsche Turbo S.

If you sent this monster’s DNA to Anscestry.com, I’m convinced it would come back 50% automotive and 50% locomotive. Those twin turbos gobble up pavement like a 17-year-old attacking a breakfast bowl of Wheaties.

I’ve had the good fortune to drive some incredible cars in my time, but I don’t know if I have ever driven a better one. Stay tuned — In just a few weeks Mike is generously putting his Turbo S on display as part of our CARes for the Community exhibit at the Gallery. You won’t want to miss it!