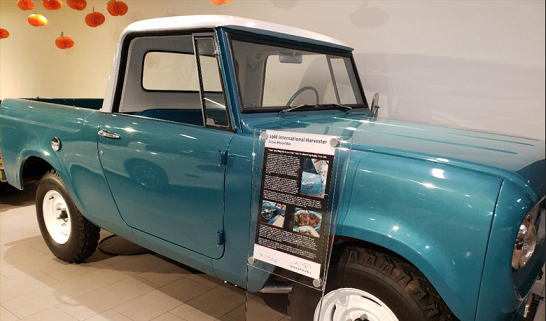 There is an invisible line in life when birthdays cease being about ice cream, cake and candles and meld into milestones and memories. One of those birthdays is fast approaching on the 30th of this month. It’s a birthday that represents both a wonderful milestone and great memories: On November 30th, 1960, the International Harvester Scout was born in Fort Wayne, Indiana!

It isn’t uncommon for automobile manufacturers to make tractors. Ford, Fiat, Volvo, Mitsubishi, even Porsche have done so — just to name a few, but rarely has a tractor manufacturer dared to produce a passenger vehicle.

In fact, it has only happened twice in history, by IH and Lamborghini — three times if you charitably count Minneapolis Moline’s peculiar UDLX Comfortractor, which made a brief appearance in 1938 at the end of the Great Depression. More tractor than car, only 150 were ever sold.

Ferruccio Lamborghini’s decision was driven by his contempt for Enzo Ferrari when he complained to Ferrari’s big boss about the awful clutch in his Ferrari. In less than a soothing tone, Enzo suggested Ferruccio should stick to making tractors. Ferrucio responded by building a direct competitor.

Two years before Lamborghini’s dust up with Ferrari in 1962, International Harvester introduced the Scout as a polished alternative to the Jeep CJ which had enjoyed an unmolested monopoly on 4-wheel drive passenger vehicles since 1945.

Creating the Scout was a big leap even for a company whose manufacturing roots dated back to 1834. The closest International Harvester had ever come to building anything for Mr. and Mrs. America, was supplying trucks and heavy equipment to the military in WWII. International Harverster’s designers did a masterful job masking their inexperience.

The Scout 80 was pure platinum from the moment it debuted in late 1960, and, by the end of the decade, had eclipsed Jeep’s once seemingly insurmountable dominance to become the 4 x 4 champion. More championships followed at the grueling BAJA 1000 in Mexico, sending shivers through Jeep’s headquarters in Toledo, Ohio.

Tearing a page from the “imitation is the sincerest form of flattery” book, Ford introduced the Scout’s identical twin in August 1965 called the Bronco. The Blazer and other competitors followed making for a crowded 4 x 4 category.

During a spectacular 20-year run, the Scout prided itself in being able to climb anything that Mother Nature dared to put in its way.

What it couldn’t climb was the corporate ladder. When Case Corporation purchased International Harvester in 1980, the Scout was eliminated never to return…or will it?

VW is now planning the “electric” return of the Scout with an EV version in 2026. Thanks to the Automobile Gallery & Event Center you won’t have to wait that long. We’ll plug you into our beautiful 1966 Scout 800 now on display!