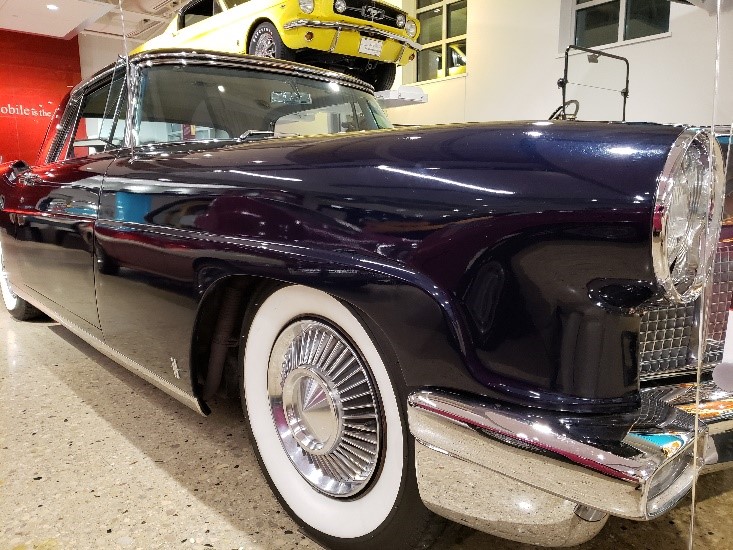 The paradox is that the Continental Mark II is scarcely remembered despite being so truly unforgettable. If recognized at all, the Mark II is almost always mistaken for a Lincoln. The fact is, for a brilliant but brief two-year period in 1956 and ’57, Continental was a stand-alone company. 26-year-old William Clay Ford, younger brother of Henry II and later the owner of the Detroit Lions, was the CEO. Yes, 26 years old!

Of the 2,556 Mark IIs produced in 1956, one was purchased just blocks away from The Automobile Gallery at Bird Johns Lincoln Mercury in Green Bay by Dr. Robert Cowles Sr. in the winter of 1956.

Grandson Jim Cowles has graciously allowed us to display the Cowles family jewel which has only travelled 18,743 miles since new.

You might wonder: How could a car company whose owners included Elvis, Frank Sinatra, President Dwight Eisenhower, Nelson Rockefeller and Elizabeth Taylor be forgotten or, worse yet, fail?

The simple answer is because the Mark II was quite possibly too perfect.

Every hand built Mark II was delivered to the dealer in a fleece-lined cover featuring standard equipment that wouldn’t be seen on cars for another decade or more. Then there was the price. A Mark II cost $10,000 when the most expensive Cadillac was $6500. Not only was it the priciest car in America it was also the heaviest crushing the scales at more than 5,000 lbs. If it was the best then it was on the Mark II. And before you scoff at $10,000 keep in mind that the American dream home cost $9000 in 1956 and the average American was thrilled to be taking home $1700 a year.

The Continental Mark II is a reminder that not all great works of art hang on a wall. At least one masterpiece can be seen hanging around The Automobile Gallery!