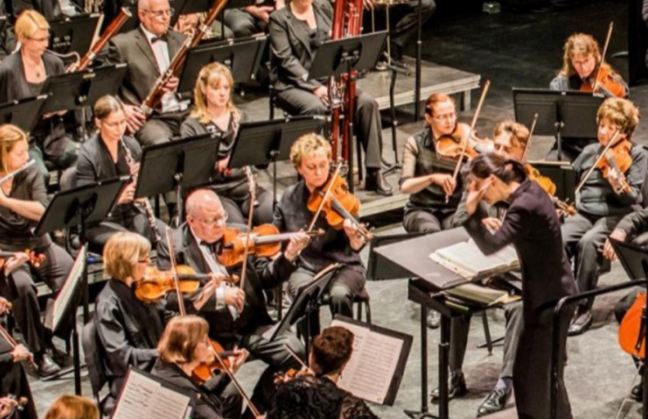 The Civic Symphony of Green Bay concludes its concert season with a program entitled “Unfinished Potential,” which takes place at the Weidner Center for the Performing Arts on April 14th, at 3 pm.

The afternoon’s performance not only features unfinished works by Beethoven & Schubert, but also includes a collaboration with the Bay Port High School Orchestra under the direction of Audrey Nowak.

This group of talented youth, full of unlimited potential, will perform the exciting first movement of Mozart’s Symphony No. 25, which they performed this past Spring on stage at Carnegie Hall, as well as several Spanish dance pieces.

The concert kicks-off with the tone poem, Finlandia, written by the Finnish composer, Jean Sibelius, in 1899. Sibelius wrote the piece for the Press Celebrations of 1899, which he wrote as a covert protest against increasing censorship from the Russian Empire, and was the last of several tableaux depicting episodes from Finnish history.

Most of the piece’s rousing and turbulent music evokes the national struggle of the Finnish people, while ending on a calmer note with a traditional folk hymn.

Our concert theme of unfinished works is showcased by Ludwig van Beethoven’s Symphony No. 10, which is a “hypothetical” work, assembled in 1988 by Barry Cooper from Beethoven’s fragmentary sketches for the first movement. Following the huge success of his 9th Symphony, it was clear from the assembled sketches that Beethoven did intend to compose another symphony.

The work was finally performed in 1988 by the Royal Philharmonic Society of London, to whom Beethoven himself had offered the potential new symphony in 1827.

One of the most famous, uncompleted works from the symphonic repertoire is Franz Schubert’s Symphony No. 8, commonly known as the Unfinished Symphony, which he started in 1822 but left with only two completed movements and fragments of two others. To this day musicologists still disagree as to why Schubert failed to complete the symphony. Some have speculated that he stopped work in the middle of the third movement due to his syphilis outbreak, while others contend that he simply was distracted by his work on his Wanderer Fantasy for solo piano.

Whatever the reason, Schubert leaves us wondering what genius we missed out on by him not completing what many consider to be his most beautiful symphonic work.

The evening caps off with a little night music in the form of Mozart’s Eine kleine Nachtmusik, which will be a joyous ending for everyone in attendance.

The Civic Symphony of Green Bay has enjoyed many highlights and successes this past season, and we very much look forward to celebrating with our audience as we continue to grow and explore new ways in which to give back to the community. Information & tickets for the season finale concert are available at: gbcivic.org. Admission for the concert is $21-Adults, $18-Seniors, $13-Students, and tickets may be purchased online at www.ticketstaronline.com, at the Resch Center during business hours.