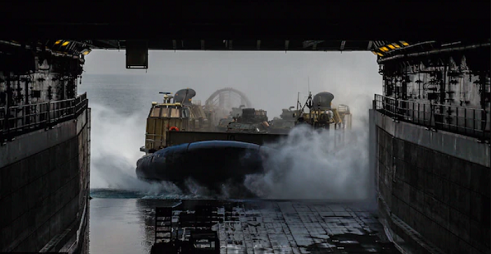 GULF OF THAILAND – The USS Green Bay (LPD 20) and embarked Marines from the 31st Marine Expeditionary Unit supported the at-sea phase of Cobra Gold (CG) 22 alongside ships from the Royal Thai Navy from Feb. 28th to March 3rd, 2022.

The USS Green Bay is an amphibious warfare ship that embarks, transports, and lands elements of a landing force for expeditionary warfare missions. She is the second ship of the United States Navy to be named for the city and bay of Green Bay, Wisconsin.

“It’s important to work with our allies in the region,” said Navy Capt. Tate Robinson, Green Bay’s commanding officer. “Working with the Royal Thai Navy, especially when we get a chance to operate our equipment from ship to ship, allows us to develop a mutual understanding and trust between our navies and our nations.”

CG 22 is the 41st iteration of the exercise and validates the commitment of the U.S to the Thai alliance through operations that strengthen bonds, build interoperability, enhance tactical skills and exchange expertise.

The USS Green Bay, part of the USS America (LHA 6) Amphibious Ready group, along with the 31st Marine Expeditionary Unit, is operating as part of the Task Force 76 Composite Deployment in the U.S. 7th Fleet area of responsibility to enhance interoperability with allies and partners and serve as a ready response force to defend peace and stability in the Indo-Pacific region.