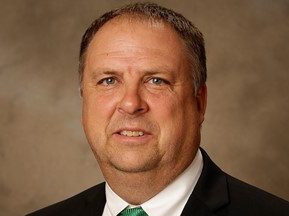 Darner completes his head coaching career for the Phoenix with a 92-80 overall record in five seasons. He most notably led the Phoenix back to the NCAA Tournament in his first season, 2015-16, snapping a 20-year program drought after his team captured the Horizon League Tournament Championship. Darner led GB to a 51-39 record in league play during that time, finishing in the top four of the standing in four of his five seasons.

“I would like to thank former Chancellor Gary Miller and former Athletic Director Mary Ellen Gillespie for giving me the opportunity to coach at Green Bay,” said Darner. “I would like to thank my staff, recruits and all current and former players who helped us make the NCAA Tournament, taking GB the furthest ever in the postseason to the CIT Finals and having the most up-tempo offense in the country.  Most importantly, I’m proud to have graduated my players at an extremely high rate including two perfect APR scores which was never done before at GB. I cannot wait to advance my career as a head basketball coach and am looking forward to new opportunities.”

Chancellor Alexander said he wishes nothing but the best for Coach Darner:

“We appreciate the leadership of Coach Darner and his focus on coaching and mentoring the outstanding student-athletes that have been part of this program during his tenure as head coach. We are a Division I University and remain committed to continuing the legacy of our outstanding Division I athletics program in the future.”

Darner coached eight individuals who garnered Horizon All-League honors (Carrington Love and Jordan Fouse in 2016; Charles Cooper and Kenneth Lowe in 2017; Khalil Small in 2018; Sandy Cohen III in 2019 and JayQuan McCloud and Amari Davis in 2020, with Davis becoming the first freshman in program history to be named Horizon League Freshman of the Year.) Four of those players earned First Team All-League honors.

“We sincerely thank Coach Darner for his service and strong commitment to our student-athletes here at UW-Green Bay and to the Green Bay community over the past five years,” said GB Athletics Director Charles Guthrie. “We wish him all the best in his future endeavors.”

Guthrie says a national search for a new head coach will begin immediately.