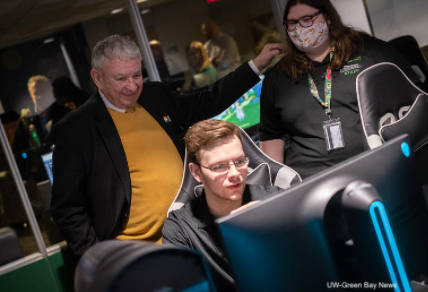 Green Bay, Wis.—An appreciative crowd said farewell to UW System President (and former Wisconsin Governor) Tommy Thompson, as he made a stop at the University of Wisconsin-Green Bay on Tuesday, March 15th, 2022. Thompson visited with students at the new E-Sports Lab in the University Union, before touring the yet-to-be-dedicated Willie Davis Finance and Investment Lab, in the Cofrin School of Business. The campus community then honored Thompson in a formal program.

While representatives of UW-Green Bay’s community made their way to the podium of the 1965 Room in the University Union, Thompson listened patiently. The message was clear: Thompson has made a profound impact and was an outstanding advocate for UW-Green Bay, the UW System, the region and the state, during his tenure as President.

“I wanted to visit the campuses in my final days, not to be thanked, but to thank all of you from the bottom of my heart,” an emotional Thompson responded to members of the crowd, who made it a priority to visit with Thompson during the University’s Spring Break. “Next to the people of Wisconsin, the UW is our greatest asset, our greatest resource,” he said. “I love this University, and you have done an outstanding job.”

UW-Green Bay Chancellor Michael Alexander said it is difficult to put into words what President Thompson has meant to the University, region and state.

“I have been incredibly fortunate to work for President Thompson for the entire time I have been chancellor,” Alexander remarked. “He has been an amazing advocate and leader. In our first conversation, President Thompson asked me, ‘What are we going to do about enrollment?’ I said, ‘We are going to get to 10,000 and eventually 12,000.’ He said, ‘I’m not interested in 12,000, I’m interested in 15,000!”

Chancellor Alexander then presented President Thompson with the highest honor the University bestows on a member of the community—the Chancellor’s Medallion and a plaque that read:

“In recognition of inspiring service and leadership to the state, region and the University of Wisconsin-Green Bay, with unwavering commitment to education and The Wisconsin Idea. Your impact as UW System President has extended to every corner of the University in our great state. For being in our corner when it mattered most, the highest award bestowed by the University is presented to you on this day, March 15, 2022.”

Thompson reaffirmed in closing remarks that he isn’t “retiring”: “Don’t think I won’t continue to be in the arena. I am going to be there for you… lobbying for you, telling everyone about UW-Green Bay.”

During the event, David Brooker, district director for Congressman Mike Gallagher (WI-08) first read, and then presented Present Thompson with a hard copy of a Congressional Record which was officially read into the proceedings of the House of Representatives “in recognition of the Career and Service of Retiring University of Wisconsin System President Tommy Thompson.”