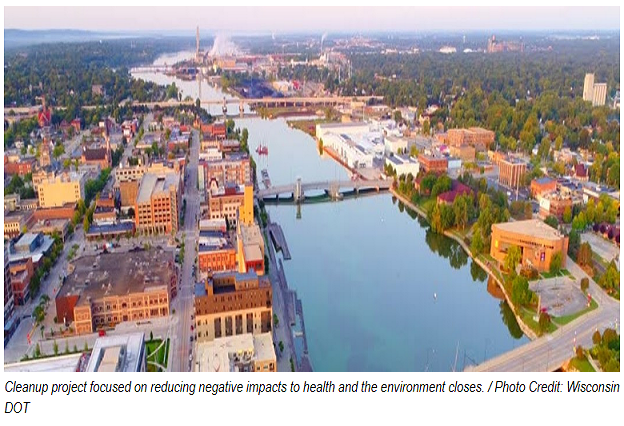 The Wisconsin Department of Natural Resources (DNR) announced on January 9th, the State Closure process in the Lower Fox River PCB Cleanup Project. This is the next milestone for the 17-year-long cleanup of the Lower Fox River and Green Bay now that all cleanup work is finished.

State Closure can be approved only after the cleanup work is finished and the U.S. Environmental Protection Agency (EPA) certifies it as complete. This certification was issued in October 2022.

The cleanup work was successfully completed in 2020 through collaboration between the DNR, the EPA, the U.S. Fish & Wildlife Service, tribal nations and corporations responsible for the cleanup and care of the river and bay.

State Closure requires mailing notice letters to those who live and work on the river before DNR issues final closure approval. The notice letters will be mailed in January 2023 to about 1400 riverfront property owners to inform them of project completion and the request for final closure. Those who receive notice letters are being informed of cap areas and asked to not disturb them.

The DNR began oversight of the project in partnership with EPA in 2004 when the cleanup started along 39 miles of the Lower Fox River and the bay of Green Bay. The project targeted polychlorinated biphenyl compounds (PCBs) in river sediments.

PCBs are toxic chemicals used historically in the production and recycling of carbonless copy paper in the 1950s through 1970s. The project removed 6.5 million cubic yards of contaminated sediment through hydraulic dredging, and engineered caps were installed on another 275 acres of riverbed. These caps must be protected from future disturbance to ensure success of the cleanup for years to come. Caps will be routinely monitored by the cleanup companies.

The cleanup companies, Georgia Pacific, Glatfelter Corporation and NCR Corporation, are responsible for all work and costs.

Long-term testing is underway to measure PCBs in fish tissue, sediment and surface water. Test results show significant reductions of PCB concentrations compared to concentrations measured in 2006 for the upper reaches of the river. The entire river and the bay will be tested every five years until cleanup goals are achieved to the satisfaction of the DNR and EPA.