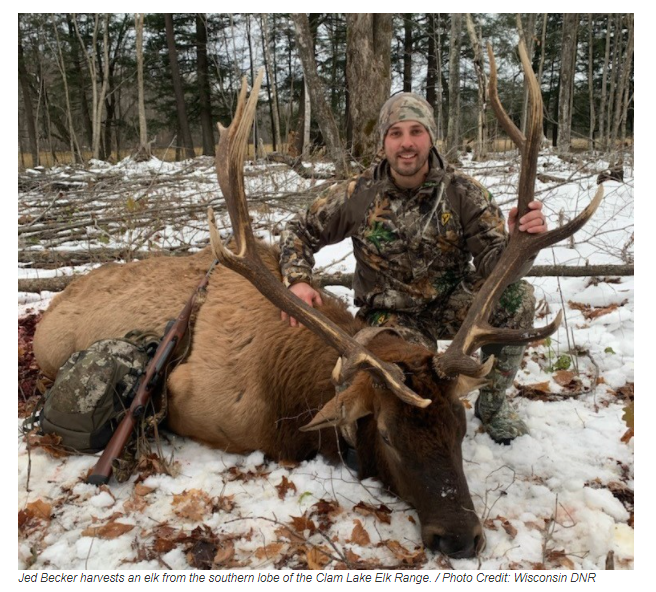 MADISON, Wis. – The Wisconsin Department of Natural Resources (DNR) today announced that the five Wisconsin elk hunters filled their tags during Wisconsin’s third managed elk season. The 2020 season marked 25 years since the reintroduction and management of elk began in the state.

The five state-licensed hunters formed a strong bond and worked together toward a successful hunt. In order to stay safe during the ongoing COVID-19 pandemic, the group used online chats and social media to discuss plans for the hunt and encourage each other for this once-in-a-lifetime experience.

“This wasn’t a typical season for this year’s elk hunters, so they got creative,” said Josh Spiegel, DNR Wildlife Biologist. “Each of the five hunters had unique experiences, but all ended the same with the harvest of a beautiful Wisconsin bull elk.”

There were many highlights to the 2020 elk hunt, including the first elk ever harvested in the Clam Lake Elk Range’s southern lobe, a 502 square-mile area added in 2012. One of the bulls harvested was also the first game animal harvested by one of the five hunters selected.

“Starting your hunting career by harvesting a bull elk on an unbelieve tag is a pretty incredible experience,” Spiegel said. “Not only were all the hunters rewarded for their hard work, but very grateful for their experience too.”

The Clam Lake Elk Range covers 1,620 square miles and reaches into portions of Ashland, Bayfield, Price, Rusk and Sawyer counties. The original herd began with 25 Michigan elk, released in 1995. In 2014 and 2015, 26 Wisconsin elk were released in the expanded range using an assisted dispersal process. In addition to that, 92 Kentucky translocated elk were released in 2017 and 2019 on the Flambeau River State Forest. In all, the Clam Lake Elk Range had a 2020 population estimate of about 300.

For various reasons, members of the Ojibwe tribes did not harvest an elk during the 2020 season with the five tags allocated. Over the previous two years, Ojibwe tribal members filled their five-bull annual quota, while the DNR tag holders filled nine of their 10 possible tags over the same timeframe.

Following a three-month application period, the DNR selected four hunters at random from a pool of about 28,000 applicants. The Rocky Mountain Elk Foundation (RMEF) awarded the fifth state-issued tag through their fundraising raffle. The RMEF chose a winner from almost 1,600 applicants.